This is the annual blog post where I resolve to do things, to better myself as a human being. The problem with resolutions, is they tend to get left by the wayside as the year wears on and different problems take precedence. Or maybe that’s just for me. Still, its good to have goals, and one of the best ways of keeping to them, is to be able to track them and see how good you’re doing. Also, know your limits. You probably aren’t going to get six pack abs by July unless you’re also prepared to completely give up pizza and spend all your time in a gym. I’m prepared to do neither of these things. Here’s my resolutions:

#1: Publish Impervious, or sell it. I know this breaks my, ‘big things’ advice above, but dang it, this has to happen this year.

For the record, I wrote 103,199 words last year. I even have a pretty little graph that will show you what I did. This resolution should be easy to keep track of. 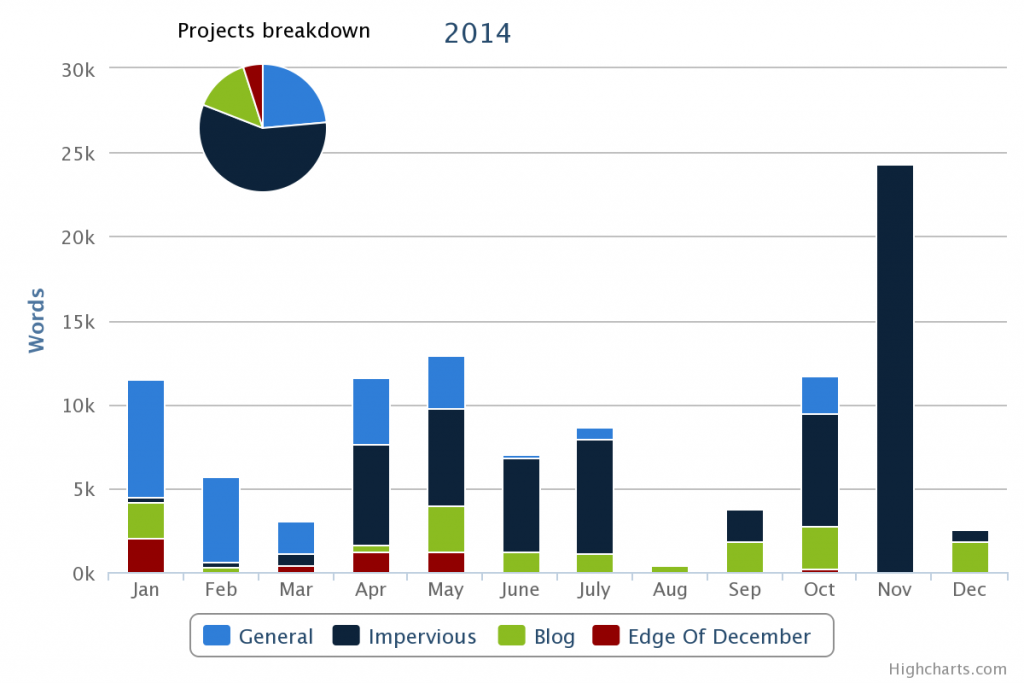 #3: Read more than I read last year. The list of books I have to read on my Kindle is truly ridiculous. I’ve got reams and reams of pages to read before I’ve even scratched the surface of my ‘to-read’ list. This one shouldn’t be hard. I have books. I love reading books. I’m a fast reader. It should not take me a month to read a bloody book. I’m an author. I should be writing every day, and I should be reading every day too.

That’s it. Those are the big three resolutions that I have. What’s that I hear? Nothing about WordKeeperAlpha? Haha. Worry not, fair folk. WKA isn’t going into hiatus, or development even being stopped. Last year, I felt that getting version 2.0 of WordKeeperAlpha up and running was more important than getting Impervious finished. Was that the right choice? I think so, especially given just how successful its been in such a short amount of time.

I thought it would be a year before I had one hundred users, instead its been a little more than 4 or 5 months since I launched 2.0 and already I have somewhere near 300 users. I have lovely people who are leaving comments, requests for more features and letting me know when something is broken! Its already come along farther than I thought it would, and I’m excited to see where its going to go from here. I hope everyone will stick around with me for that journey.

In short, 2015 will be punctuated by several updates to WordKeeperAlpha, but nothing so large as another new version. You’ll probably see the first of the social features, some blog functionality or an api that others can develop off of to make widgets for blogs, and a lot of little tweaks and fixes. I’ve got plans, but they will evolve as WKA evolves, and I’ll share them with you here.

That’s it. All my nefarious plans for 2015. Stay tuned this year to find out how I do. I’m looking forward to it. In the mean time, if you’re a WordKeeperAlpha user, drop me a line, let me know what your goals for the year are.