It’s difficult to sum up a span of time like a year in a few short (long in my case) paragraphs, but the last couple years have kinda shared a theme. There were highs, and there were lows. When you’re attempting to be creative, the shit that’s going on in the world can really have an impact over what you get done.

And 2017 was a number year for shit going wrong in the world.

But, I’m not here for postmortem on the year as a whole. I think we all know what happened, and we can remember it later. Here’s how I did on writing this year. 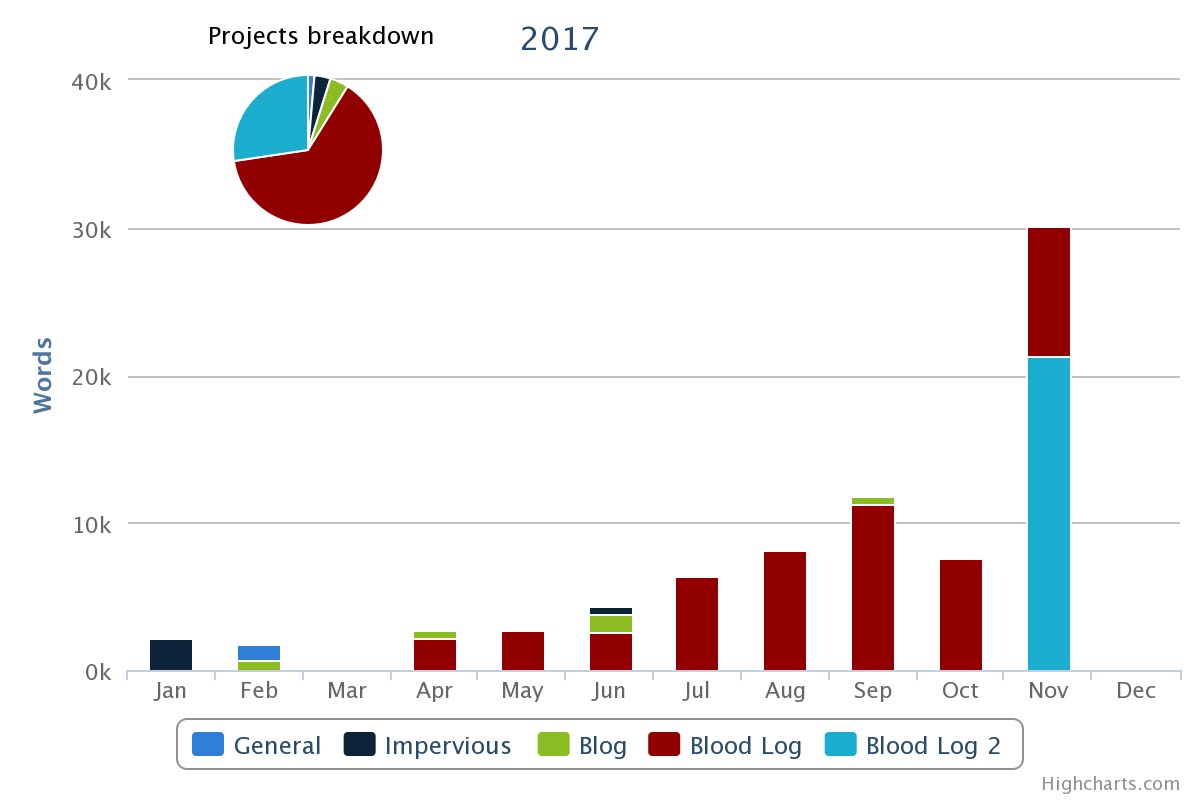 As you can see, the first part of the year was utter crap for writing. Jan-May were pretty much nothing months, with the sole victory of rediscovering one of my previous years’ NaNoWriMo novels, the now named Blood Log.

Still, instead of focusing on failures, I’m going to focus on the fact that I took what I’d done on Blood Log and ran with it. I’ve now got a finished first draft, and notes to start in on the second draft.

NaNoWriMo 2018 was something of a wash. I didn’t finish the full 50k, but I did at least get a start on the second Blood Log novel, which I’m still having fun with. At this point, I’m not sure how far I’ll take Blood Log, but it will be my first published novel. I won’t start shopping it around to agents until I’ve finished a third draft, and I don’t expect many to bite at it since the Urban Fantasy market is falling at the moment. Still, who knows? Maybe I’ll get lucky. Assuming though that traditional publishing fails me, I’m going to be paying for editing and a book cover and maybe it’ll be for sale on Amazon sometime in 2019? By then, I should have the second book finished, and in the editing process. We’ll see how it goes.

Where does that leave Impervious? I don’t really know. I certainly haven’t given up on it. I think I could bring that one to market, but I still think it was the wrong project to focus on given my level of experience. Once I’ve got a few books done and out the door, I’ll dust Impervious off, dust off the sequel and finish them both out. I’m not averse to self-publishing those…but they’re huge, and will cost some serious money to get edited myself. Maybe a few other books earning money on Amazon would fund its editing?

So, I had a bad writing year. It happened. I’ve had those before and I’ll have them again. My main goal is to power through a second draft to Blood Log and get it out to some beta readers with enough time left to also push out a third draft. I also want to at least get a good start on the first draft of the second Blood Log novel, if not finish it. However, I’ll be starting the year off by writing the first “light novel” for Edge of December. It doesn’t have a name yet. It barely has an outline in my brain. I’m not even sure exactly how its going to work, but expect that one to move faster, as Glenn is eager to continue the EoD story and so am I. It’s been too long without the ridiculous disasters that Kieron, Trife, and the gang got themselves into.

Yeah, I haven’t been communicating very well on WKA, and I haven’t been too good about developing new features either. I’ll be honest. My eyes, they are a wandering. Not so much away from WordKeeperAlpha, and more towards WKA 3.0. A lot has happened in the world of web dev since I came out with WKA 2.0 and I’ve tried to roll with the times as I continued development, which has lead to WKA’s code base to become fragments and a bit of a mess. I’ve been itching to start in on 3.0 with my collection of new toys and ideas that I’ve come up with.

Hence, after my next major update, and along with a few “quality of life” improvements, I think that I’m going to start in on 3.0 sometime next year. I’m not going to be building things out from the ground up, entirely, but I will be re-architecting things, using a LOT more JavaScript, and finally get around to implementing that full-blown API I’ve been talking about for a while. It’s gonna be a metric ton of work, so don’t expect a lot of news on this front. I’ll still be around though, doing bug fixes on 2.0 and generally making sure the lights stay on.

WKA was always supposed to do a lot more than what it does right now. The system that I’ll be building should be able to accommodate a lot more and be a little more flexible than the first one I created. Look forward to it sometime in the distant future!

Writing a book is a lot of work.