Let me walk you through something.  Its something you probably realize, but maybe just don’t grasp the significance of.  Pull out your phone and take a look at it.  Is it a two year old Android P.O.S. that you got for free with your cell phone contract, or the newest iPhone 6?  Is it just a plain old phone with an LCD display?  Doesn’t matter.  That shit was impossible 30 years ago.  How did you get your news 30 years ago?  TV, newspaper, or radio, I’m assuming.  That or word of mouth.  You kept all your music on tapes that held… 10 songs?  If you didn’t like one of those songs you just suffered through it.  Computer monitors had 2 colors, unless you were really fancy and they had 16.  You stored information on 5 and a half inch floppies.   If you wanted to talk to someone you called on one of these: 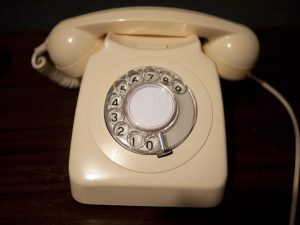 How does this work again?

Just… think about that.  Twenty years ago, people were just getting online. There was no Google.  There was Webcrawler, which if you were too young to remember it, be grateful.  You couldn’t use the phone while you were surfing the web or checking email because it used your phone line.  You probably had a calculator.  Think about it.  It was probably about as big as your current phone.  If you wanted to find something in a library you still needed to use a card catalog.  If you wanted to buy a book, you went to the bloody store.  You bought things from a JC Penny’s magazine.  You found something in a crappy pseudo-book someone mailed to you, then you called a person up, on that crap phone, with your order between the hours of 8 and 6.  You might have wrote them a check.

Lets go ahead and fast forward to now.  Lets say you have an iPhone.  It has between 3,200x and 26,200x the memory of my family’s first computer.  Want a more detailed look of how far computers have come in 30 some years?  Try this.  Well, that’s comparing the computers of yesteryear, the first personal computers to our modern day smart phones.  If you’ve got a tablet, you’re holding science fiction technology in the palm of your hand.

Your music collection might still be on CDs, but chances are it isn’t.  Even if you still buy CD’s you bring it home, pop the disc in your computer once and put that thing in a digital library that probably contains THOUSANDS of songs.  To listen to any one of them, all you have to do is search, and click play.  Before I went to college, I thought people were lying to me when they said that they could download and watch whole movies, now its rare that I even bother going to get a physical copy of a movie that I want to own.  When I went on vacation as a kid, I had to find room to pack two or three extra paperbacks, just to make sure I had enough reading material.  Now, I have an eReader that currently holds nearly 400 books and it weighs less than a single paperback, takes up less room, and has a built in light, and connects to wireless internet to go and get MORE books.  My first MP3 player held about 13 songs and ran on AA batteries.  My iPad holds thousands of songs, audiobooks, tv shows AND has access to both Amazons library of music AND video AND Netflix … so on and so forth.

Lets talk about maps.  How many of you can find your way from your current location, to somewhere you’ve never been, in a different city, using a paper map?  That’s how my parents used to navigate on family trips, and I have no clue how they did it.  Well, I know how, and may be able to myself…maybe.  But my phone knows where I am and can tell me how to get ANYWHERE.  Most of the time.

We have video watches.

We have honest to goodness cyborgs!

We have machines that can turn human waste into electricity AND drinkable water!

Self-driving cars? On the way.

Want to do something cool? The average human is your investor now, go and do it!

Sure, back to the future two prophesied that we would have hover boards, flying cars, and Jaws 19, but I think that what we’ve actually got is way better.  Well… Mr. Fusion sure would be nice. Oh.  Wait!  Also, flying cars would be a terrible idea.  I know I don’t want the jack-asses I have to drive with every day in control of something infinitely more dangerous than a car.

So… here we are! The future!  How do you like it so far?  Got any favorites that I missed?  Discuss!

Tags:2015, looking back, technology, the future

Frigidaire taught me to hate again.