Greetings fellow nerds. I write to you tonight from the comfort of my own home, drinking a nice Blue Moon Belgian Ale and listening to the new Nightwish album, Shudder Before the Beautiful.  Truly, life is good.  However, life has not been entirely productive this month.  Mid-month writing progress is kind of disappointing, as is work on WordKeeperAlpha.

I’ll admit it: I’ve kind of been wasting my free time for the past few weeks.  I’ve been hitting the video games a little hard and its been fun.  Soon enough, time gets away from you and you forget what in the hell you were even working on. Thankfully, last month went pretty well as I clocked in at just shy of fifteen thousand words.  My goal was to write for a total of twenty days, and I made nineteen.  That sort of goal seems to work best for getting my writing done.  You can kind of tell when I got serious about it. 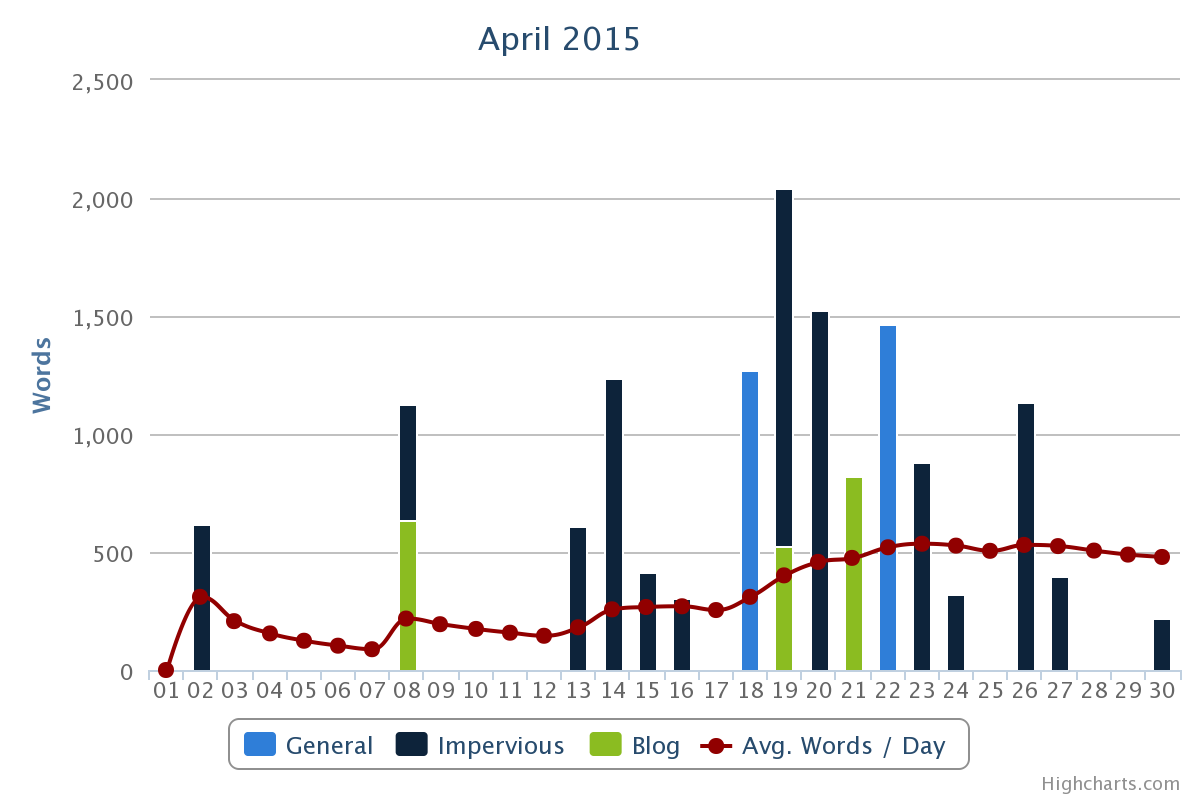 With that knowledge, I’d have liked to do that again this month, but I’ve putzed away most of the days this month, and the rest of the month is filled with stuff.  I may be digging something of a hole, in terms of my word goals, that it will be hard to get out of.  Right now, I’m doing pretty well for my year goal, only being a few thousand behind total.  This month may be something of a low point for the year.  Speaking of which, here’s how that’s looking: 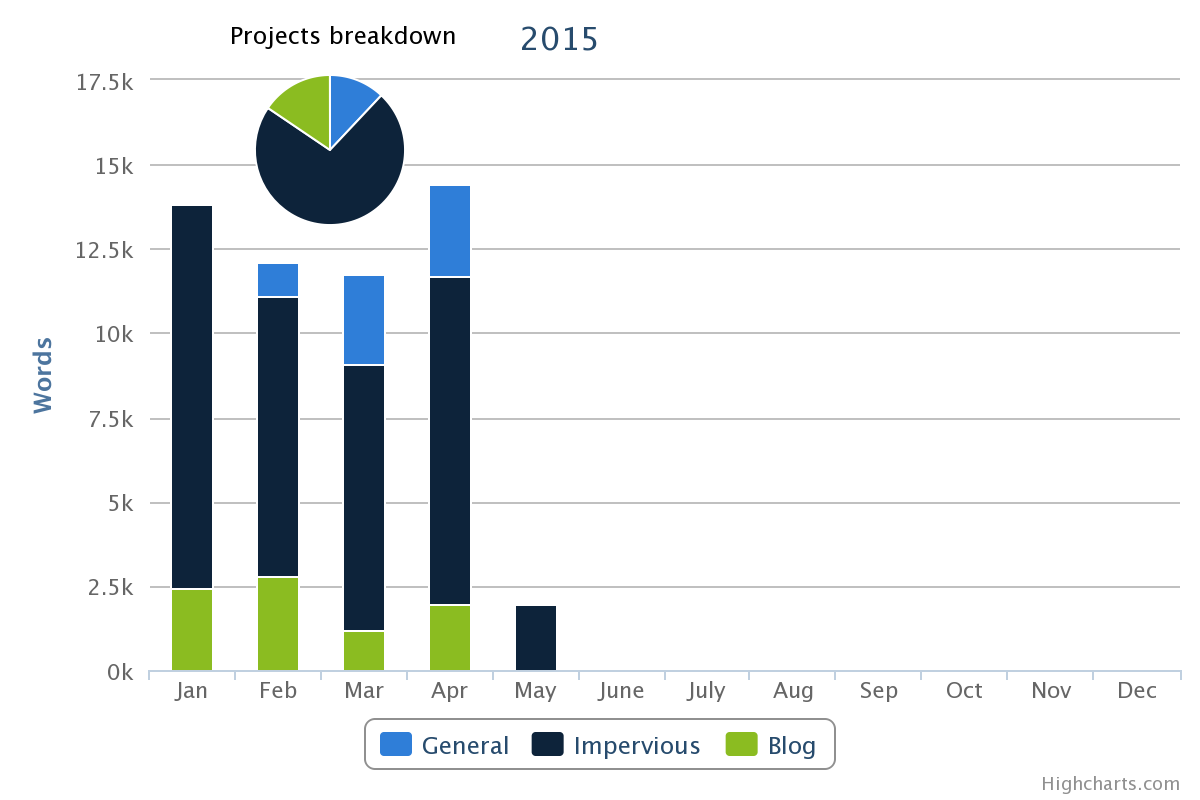 If you compare that to LAST year, I’m doing pretty good on my goals of writing more.  This is what last year looked like: 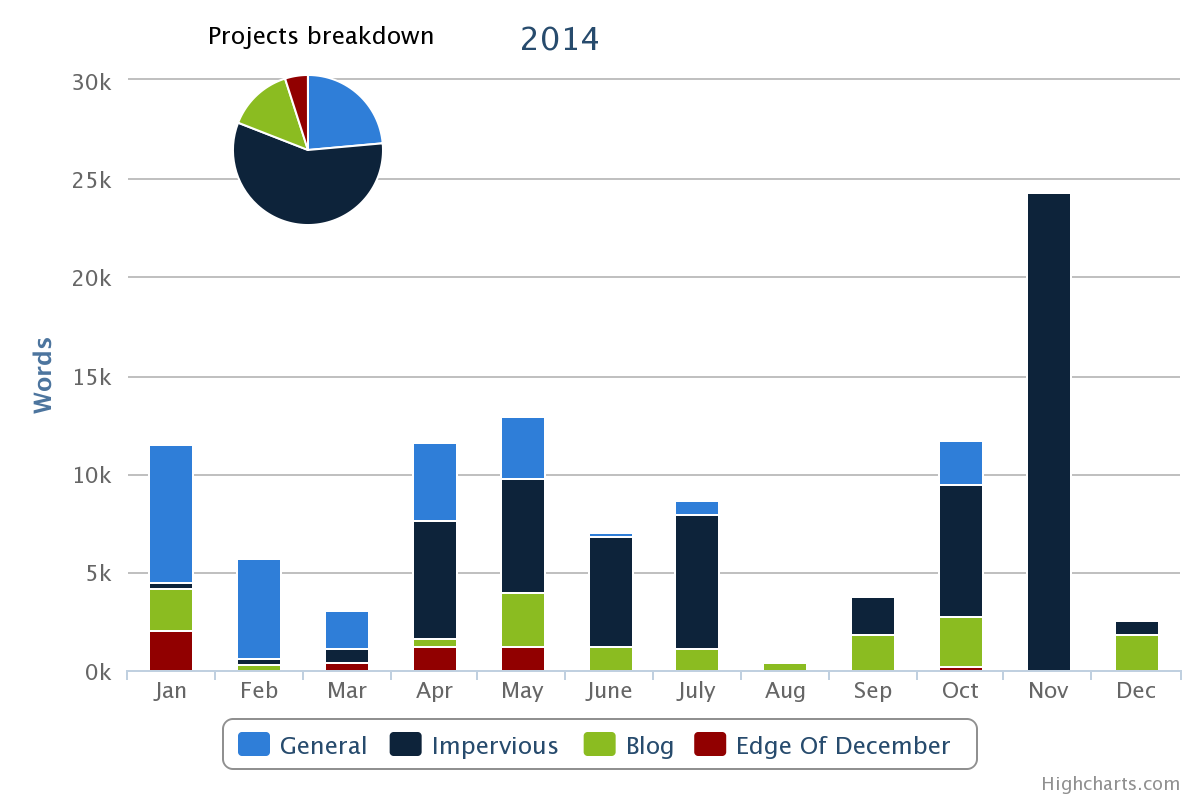 Writing for 2014 – Graph by WordKeeperAlpha

Yeah, so if you were wondering, THIS is what’s so awesome about WordKeeperAlpha.  Being able to see that, despite how I feel, I really am doing better, is a huge boon.

So, I might not be making all my goals, but I have been getting much better about my writing.  And I’ve been focusing much better on Impervious.  I wish I was keeping to my one chapter a week goal, but as usual, there are extenuating circumstances.  Most of them are related to my inexperience in writing a whole epic fantasy novel.  Every now and again I come to a problem in the plot that can only be fixed by going back and doing about two weeks of work on worldbuilding and figuring out why something works the way I want it to.

Bah, but enough about that. While Impervious is my main project, I’m also working, if slowly, on WordKeeperAlpha.  So far this month, I’ve identified several areas to improve upon, marked down many new tasks to take upon myself for later versions and mostly played around with the code behind the scenes, making it a bit more robust and preparing it for future upgrades.  I know you, the users, might not notice much, but I AM working on it.

Something that’s really of note though, is that I’m rolling testing for the API.  By that I mean, the first function on the API is live and waiting for someone to try it out.  So, if you’ve got some coding know-how and want your blog readers to see your goals and progress on your blog or website, let me know and I’ll fill you in on what you need to know.  I’ve got another few features to finish before the whole API is good to go, but once it is I’ll work up some examples to make it more easily accessible for the non-tech savvy types.

Now, with my blogging duties done, I think I’ll get some work done on Impervious before I kick off for tonight. Later mi amigos.