It goes without saying, the internet has changed a lot since 2002. I said it anyway. This was a pre-iPhone world, kids. This was pre-WiFi. You wanted internet, you jolly-well plugged an ethernet cable or, god forbid, some archaic telephone-based modem into your computer. It wasn’t the dark ages, like the 90’s, but many an old nerd has forgotten the struggles of the early aughts.

Despite the challenges we once faced (typing texts on a numeral pad like a peasant) it was also when the internet was really getting rolling. A lot of new things were starting, and it would take a few years for them to really catch on, for better or for worse. Lookin’ at you Facebook.

Be it Penny Arcade, PvP, MegaTokyo, or any of the many comics that have come, gone, and disappeared since then, the early 2000’s was, at least to me, the dawn of webcomics. I may be biased. I spent my high school years in small town Nebraska. When friends from college told me they could download whole movies over the internet, I just assumed they were lying to me. My internet speed was measured in kilobytes. Just enough to play Diablo, Starcraft, and maybe do some searching on WebCrawler. WebCrawler. Hands up anyone who remembers that. So when I say the 2000’s were when web-comics got their start, I’m just assuming, because I wasn’t really here before 2000.

Once I really got on the internet though, I quickly found dozens, nay hundreds, of comics were being published. And with that hundreds of hours of my life have vanished into the void that is the internet. One of the first that captured my attention then held it for well over a decade was Dominic Deegan: Oracle for Hire by Michael Terracciano (@mookiebean). It started in May 2002 as a three-panel, joke a day comic starring the titular Dominic, a nerdy seer, and his talking cat Spark.

Dominic starts off small, focusing on the main characters of Dominic, Spark, and Luna, but quickly opens up the world via the main characters various relationships. Over the next eleven years, Dominic’s path takes him from telling the fortunes of annoying villagers, to fighting planar battles that would determine the fate of the entire world. No matter what is happening though, you can expect puns, alliteration and other forms of wordplay. The stellar cast quickly grows beyond the original three characters, branching and expanding out into the bigger world. From the human-dominated Kingdom of Callan with its systemic problems of racism and mage privilege to the ruined Plaines of Maltak where the Orc tribes are struggling to restore their homeland following a demonic invasion decades ago. There’s a lot to get into and I love it all.

Terracciano’s various cultures felt real and vibrant and provided contrast to the mostly human cast. While Dominic was most often the viewpoint character, the story would frequently shift perspective to follow other secondary characters, whose roles would also prove pivotal throughout the main story. Just as important as Dominic was his paramour Luna. While they both become forces for good in their own right, I always loved Luna’s character arc, overcoming her past and embracing her own power. Nearly every other character experiences a similar character arc, growing and evolving as the story continues, and is a large part of what brings me back to re-read it every few years or so. 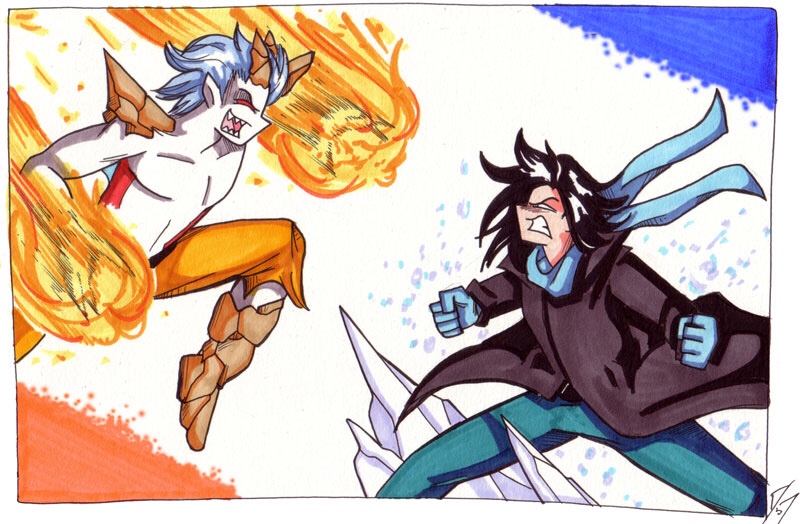 I started reading Dominic Deegan when I was a dyed in the wool conservative Christian. It’s probably fair to say that Terracciano’s characters and stories were one of the first exposures to LGBT characters and one of the initial influences that made me the “Liberal snowflake” that I am today. Dominic Deegan had an honest and positive effect on the way that I think today, and I can’t think of higher praise for a work of fiction.

That being said, I think some of my favorite characters are still Miranda and Donovan Deegan, Dominic’s parents. They’re both heroes in their own right, though retired from their adventuring days. Miranda is an Archmage with few peers, while Donovan is a world-renowned bard, fond of puns and wearing pink (“Only real men wear pink”). Among other things, they serve to give the world a sense of history, that settled it firmly in my mind. Their adventures affect Dominic’s world and the problems he has to face, and he still has their experience to guide them. There’s a host of reasons why I love Miranda and Donovan, but I want to keep this as spoiler free as I can.

Terracciano isn’t afraid to lighten a dark moment with a pun, or a recurring gag used in a fresh way to keep a long, multi-day fight from feeling too stale. Terracciano’s art starts a little rough in 2002, but practice does make perfect. He stuck to a once-a-day update schedule for much of DD’s 11-year run, and that much practice quickly starts to show in the art, so don’t let that earlier art dissuade you from reading through to the end. Being able to see an artist develop over time is something I actively love about webcomics. 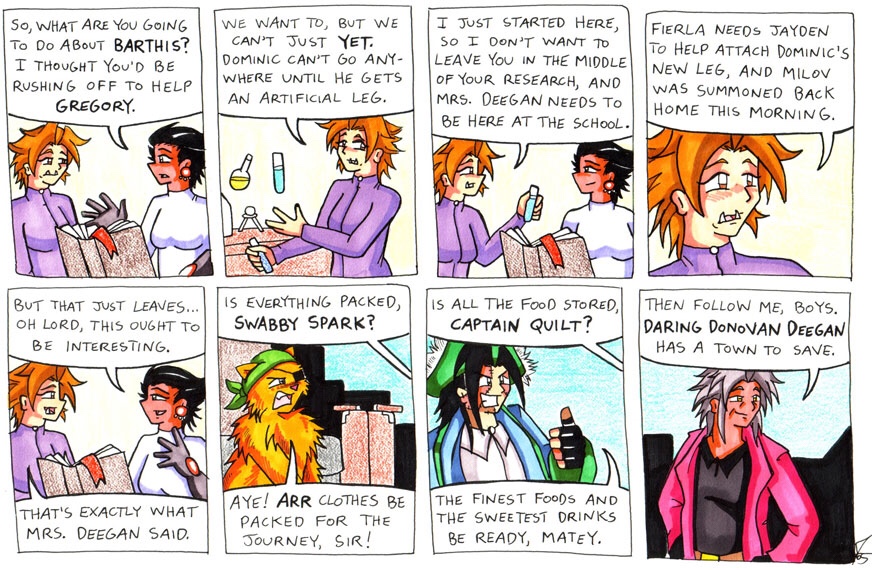 Dominic Deegan was one of the first web-comics that I ever fell in love with. Like all good things though, it came to an end. Thankfully, Mookie (Terracciano) fell in with one Garth Graham, another old-school web-comicer. They are currently working together to make Star Power, a science fiction, superhero webcomic that comes out three times a week, on Monday, Wednesday, and Friday. I will undoubtedly be writing about Star Power sometime in the future because it is stellar. See what I did there?!

The whole of Dominic Deegan: Oracle for Hire is available to read online (over 3000 pages!), or you can go by the Seer’s Catalog and buy the two massive volumes containing the entire run(something I intend to do soon). Until then, I think I’ll just take a few days to read through it again. I’m due to spend a little time with my friends, and maybe steel a little inspiration for my Pathfinder campaign. 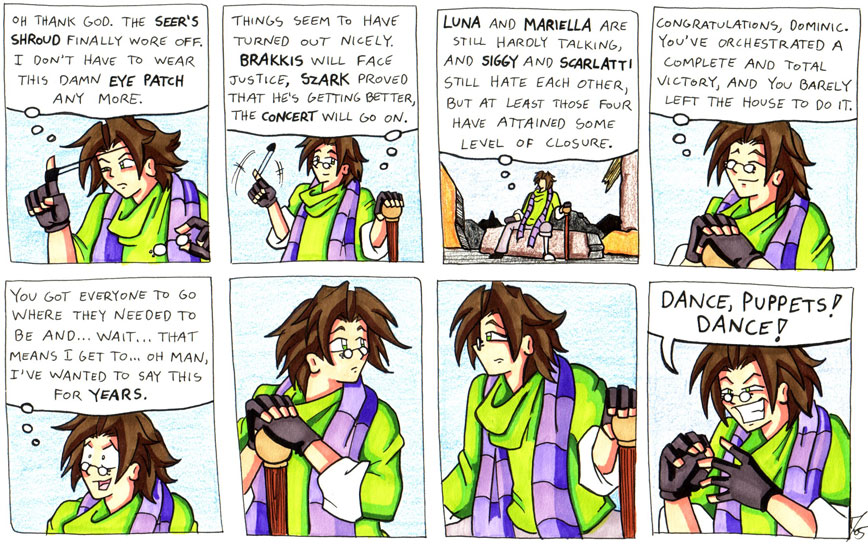