Phew! So that was a thing that happened. In case it wasn’t obvious from the title I participated in NaNoWriMo this month, and unlike last year, I won! I won in the sense that I wrote 50,200 words, rather than finished an actual novel. I don’t think anything I ever write is going to be finished in a paltry fifty thousand words: Such is the fate of the genre author. I am including short fiction in that by the way. I’m absolutely awful at writing anything under ten thousand words, which is why I don’t submit to many magazines. More’s the pity.

Still, if you did National Novel Writing Month, good on you! Doesn’t matter if you finished or not. If you wrote one thousand words then that’s a thousand more words you have written now than you did in October. Since I wrote a big ol’ web app for the sole purpose of graphing my progress, I thought I’d show them off here. And since there’s nothing you can do to stop me… Well I don’t know where I was going with that, but here’s the graphs. 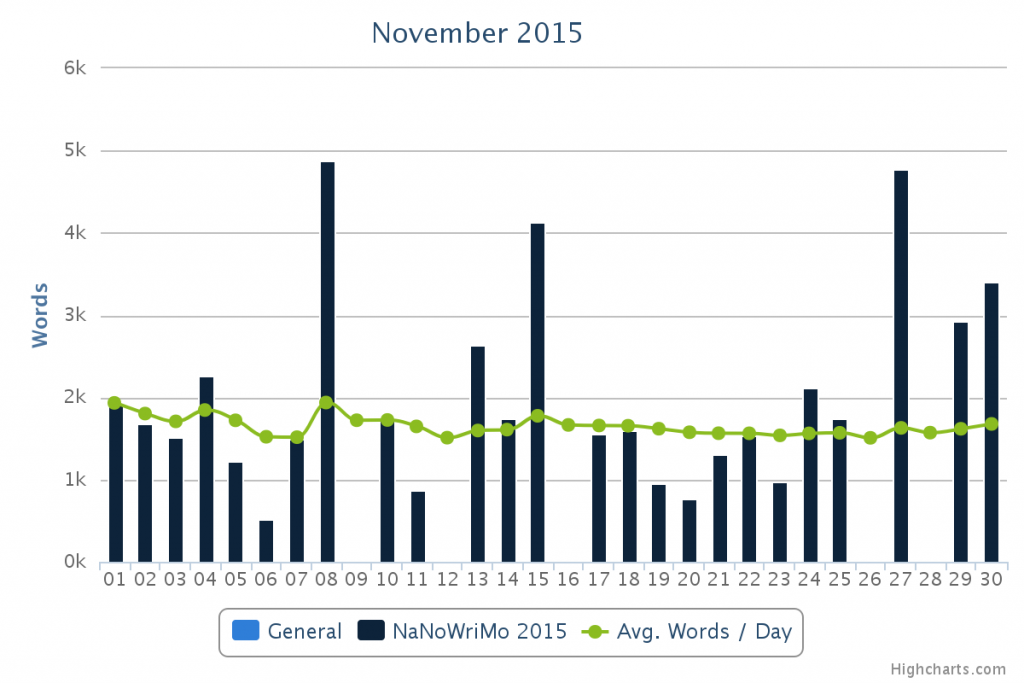 As you can see, I kind of rely on a few big pushes to get myself through the month. I also take more days off than I should. I think my goal for next year is going to be to write every day during the month, no matter how few words I log.  This is what my progress looks like through the lens of the NaNoWriMo bar graph: 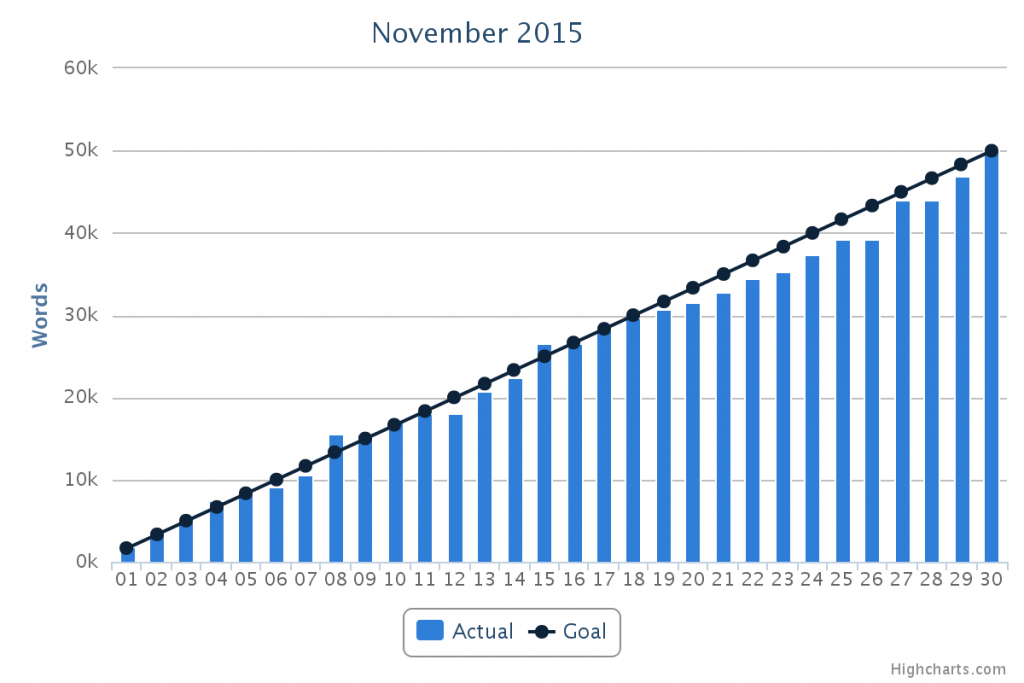 I spent a good portion of the latter half of the month behind schedule, but I don’t think I ever got more than two days behind.  I’ve had months where I got really discouraged being just a day behind, figuring I’d have to load all that extra writing into one writing session or I’d never get caught up. Key lesson here is that if you miss a day, just make it up over several days and don’t let that bog you down.

Something that those of you who actually follow the blog might have noticed that I started off with very noble intentions of writing a NaNoWriMo journal that I wanted to use to kind of map my progress. That didn’t even last half way through the month. Oh well. Maybe next year? Yeah, probably won’t happen, but I’m always game to try!

So, what did I actually write? Up till now I’ve been a big fan of fantasy. I decided that this year I’d stretch myself a little bit and write some science fiction. I got the idea a while ago for a group of space pirates (think Firefly meets Honor Harrington) manages to acquire a fully equipped, brand new, colony vessel. The universe’s situation is kind of shitty, being pretty much a space dystopia. Companies have a method of colonizing new worlds via indentured servants, using them to build the base of the new world, then just keeping them there indefinitely. Two of the major powers are on the edge of war and things are just generally shitty. So, the pirates decide to keep the ship, and use it to basically start their own world. They grab a bunch of other colonists, and other people fed up with the way the universe works and bugger off.

I got a decent start on a first draft and not all of it I’m happy with. One of the things is that I have to really crank up the challenges the crew faces, but I have to do it in such a way that it doesn’t make their task impossible. For instance, just getting the colony ship in the first place required a LOT to go coincidently right that even I was having trouble buying it.  Of course, that was largely because I was making it up as I went.

I tried experimenting with just about every science fiction trope that I know and love, seeing what worked and what didn’t. I was setting up a pretty big universe, so I don’t know exactly how much I wanted to just dump on the reader, but I had fun trying things out. I had some aliens, had transforming space fighters a la Super Dimensional Fortress Macross (because if I’m going to write a sci fi it’s going to have giant robots), space battles, and I ended up tossing in an Artificial Intelligence.  I also, ahem, wrote a couple sex scenes.

What?! I was experimenting… Phrasing… Trying new things… damn … Look, everyone has their first try at something. I don’t know if any of those will see the light of day, but I figure it’s something I probably need to learn how to do at least decently well. And let’s face it. It is a little bit fun to write people boning.

This story easily had my biggest cast of characters to date and it was more than a little difficulty to keep them all straight. My evil businessman who is going to be the main protagonist ended up being mostly just competent and kind of amoral as opposed to cackling madly in front of a storm. I’m not sure how I feel about that. I ended up spending less time than I should have focusing on the Captain of my pirate ship… I just wasn’t really sure what made her interesting quite yet. In short, that story needs a LOT of work before its ever going to end up on bookshelves, if it ever does.

If anyone wants to read it, I’d be happy to share, but you probably shouldn’t be expecting anything great.

Anyway! It’s December now so I’m going to be getting back to work on WordKeeperAlpha.com and back to work on Impervious. I’ve had a little break and its time to take some of the lessons I learned in November and finish out the year strong. Be expecting more news about WordKeeperAlpha.com in the near future and hopefully an update on the status of Impervious. In the meantime, you’ve had a couple days, get back to writing! Show me those word counts, right down there in the comments. I want to see them!

Writers Block and the smashing thereof