It’s kind of telling that in every piece I read against Net Neutrality, that not a single one of those people actually understand it.  Which isn’t to say that all the people who support it understand what it really is.  That’s kinda the way of politics: people with something to gain convince other gullible people to go along with their stance.

So, lets clear up what Net Neutrality really is.  We can start by taking a look at who stands to gain if we keep Net Neutrality and also who stands to lose.  Consider the names behind Net Neutrality; companies like Google, Netflix, Firefox, Amazon, Microsoft and over a hundred others that have built the internet that you use every day.  What do they have to gain?  In the case of Google, they stand to gain easier access to resources that will help them spread Google Fiber; something I desperately wish would come to my area.

In most other cases, what the companies stand to gain is … nothing.  Absolutely nothing.  For them, things will stay just as they are right now.  This should be conservatives dream issue!  We’re conserving how the net works, as is, right now.  Currently, the internet is a pretty level playing field, speaking in relation to getting your business online.  There aren’t any hurdles to face other than making something and getting it to people.   Net Neutrality isn’t something new that we’re trying to put into place, its how the internet was made in the first place.  What the Title II reclassification that the FCC has approved basically puts protections in place to keep it the way its been.  We’re not fixing something that isn’t broke, we’re trying to keep people from breaking  it.

Now, who stands to lose if Net Neutrality goes through.  First, I suppose I should explain to you what reclassifying broadband under Title II actually means, and why you don’t have to be afraid of it.  Basically, what Title II means is that ISP’s have to treat all information equally.  Every bit that goes along their wires has to be treated the same as every other bit.  This means they can’t give priority to some while slowing others down.  The email you are sending your mom goes at the same speed as the email that the president of Comcast, or the President himself.  That’s it.  That’s Net Neutrality boiled down to its very simplest.  And its why the ISP’s don’t want it.  Comcast, Verizon, AT&T all stand to lose money by being prevented from prioritizing content.

Could reclassifying broadband under Title II come back to bite us?  Ehhhh… maybe, but I doubt it.  TItle II is also what covers telphony services (your phone service).  How many of you are locked into Verizon to make your phone calls?  Don’t like them, what are your other options?  Just about anywhere I can think of you have no less than 5 other options to get your phone service through.  That’s what proper competition looks like.  Now, I’m not calling out Verizon and AT&T as model companies here, but you’ve got other choices, and that’s the whole point.  If Verizon were the only option for phone service in my area, what in the world would keep them from gouging me for every last penny they could suck out of me for the bare minimum of service that they could provide?

Comcast, at the very least, would have you believe that this isn’t the case, and that they are completely dedicated to the principles of Net Neutrality.  They assure us on their own website that “Comcast won’t throttle back the speed at which content comes to you.”  That is a direct quote.  It is also a lie.  Last year, Comcast demanded millions of dollars more from Netflix to stream content to their customers.  During the negotiations, Comcast severely throttled Netflix’s speeds to their customers until they caved.  That’s what Net Neutrality seeks to stop.﻿ 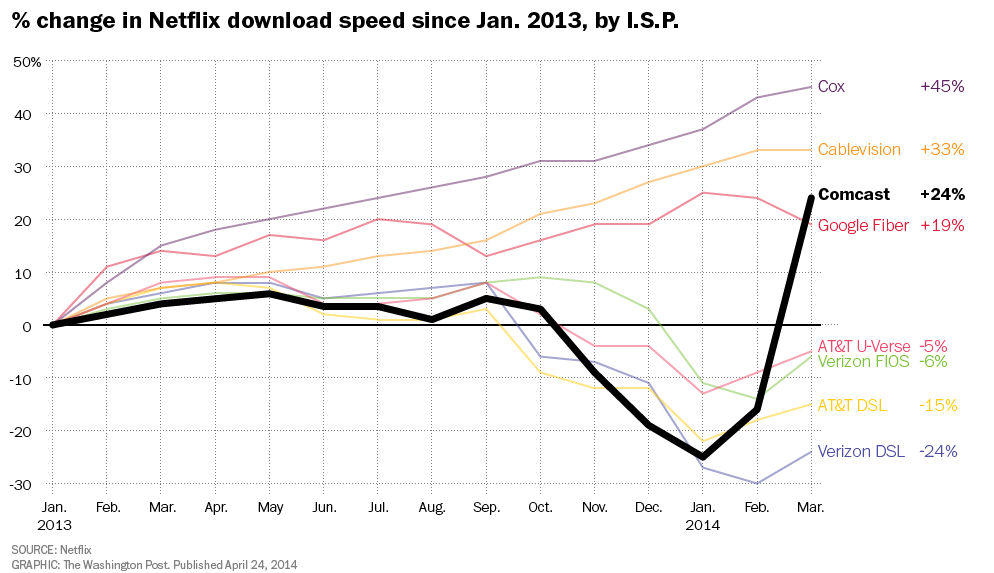 Internet Service Providers have spent millions of dollars buying legislation to prevent broadband service from being classified under Title II.  You will hear them spout all sorts of rhetoric about “protecting innovation” and “service to the American people suffering”.  Thing is, they don’t give a good goddamn about the American people.  That is apparent based on the absolutely abysmal customer service ratings and satisfaction ratings that they have.  Most people despise their internet service provider and for good reason.  Prices are high, service and quality is low, and the ISPs really couldn’t care less.

We do a lot of streaming in my house, and as such, we pay for a higher tier service package, which promises speeds of “up to 100 megabytes per second”.   What that actually translates into is speeds of around 22-30 megabytes per second.  I doubt that there’s ever been a time, even once, when I’ve gotten the speed that I actually paid for.  But I’m just one person.  Of course, I don’t know a single person who’s ever gotten what they paid for.  Actually, I’ve never heard of someone who got what they paid for from their ISP.  If I heard of an ISP that actually provided the service they advertised, I would jump ship so quickly Cox’s head would spin.  Oh wait… I can’t.

In a “free market” when I’m not satisfied by my service, I have the option to choose different service.  This ability gives the people the power to force large corporations like Comcast, Time Warner and Cox, to treat their customers better, and give us a “fair” price, or what the “market” will sustain.    But wait… I CAN’T choose another provider because the major service providers have divided up the country and agreed not to compete.  This gives them no incentive to provide me with a better product, better service, or lower prices.  If I want broadband service, Cox is my only choice and I have to live with what they provide at the price they provide it at.  Tell me, libertarians who don’t want more regulation: how is the free market going to help me?

“But Seth! Government regulation is BAD! It restricts growth and prevents innovation!”

Bullshit. Sure, certain regulation can be abused and used against people, but regulation also protects people, the customers, from corporations who couldn’t give two rats asses about them.   Look around yourselves and pay attention.   When I read libertarian stances its almost like they’re talking about the “free market” as if it were some sort of benevolent god, or God himself, making his will for equality in all things known.  Sorry princess, doesn’t work like that.

Cities like Chatanooga, TN are putting in their own municiple, city run fiber networks that provide speeds of up to 1000 megabytes per second.   They provide residents with a couple tiers of packages, at prices that beat the stockings off of what local ISP’s are offering.  Instead of responding by lowering the prices of their own service in the area, ISPs are moving to block more cities from installing their own municiple networks at the local and state levels.  They coerce cities into legally binding contracts that prevent them from providing competition to their services, or they simply pay state legistlatures to pass laws that serve the same purpose.  This, is your precious “free market”.  A market where those with the most money are free to do as they wish.

I urge you.  Actually research Net Neutrality and don’t just listen to Ted Cruz, or any other mouthpiece of the Tea Party, because they either don’t know what they are talking about, or have been out and out bought by the cable industry. I know … “No, Seth! They’re patriots who want to protect our rights from the evil of Government!”  I’m going to call bullshit again.

Well, the good news is that the FCC has reclassified broadband under Title II, and they have some other things in mind that would help increase competition, and encourage more cities like Chatanooga to install their own municiple broadband.  The bad news is that the ISP’s are buckling down and attempting to get legislation through Congress that would make the ruling of the FCC moot.  We’ve still got a fight ahead of us, but I think its worth fighting.  The internet might be stuffed to the gills with porn and various unsavory memes and morons, but its also a driving force of freedom, the economy, and information for the entire world.  It deserves to be protected, not monetized in any way possible.

The Dragon That Can’t be Fought

Tropes Vs. Women in Video games deserves your respect