My thirty thousand word month didn’t really come together like I’d hoped it would.  My goal is to write everyday, but I’m much better writing in spurts than I am writing regularly.  Having my own motivational program is helping, but it is also a bit damning when I look back on the month and see all the days that I didn’t write. 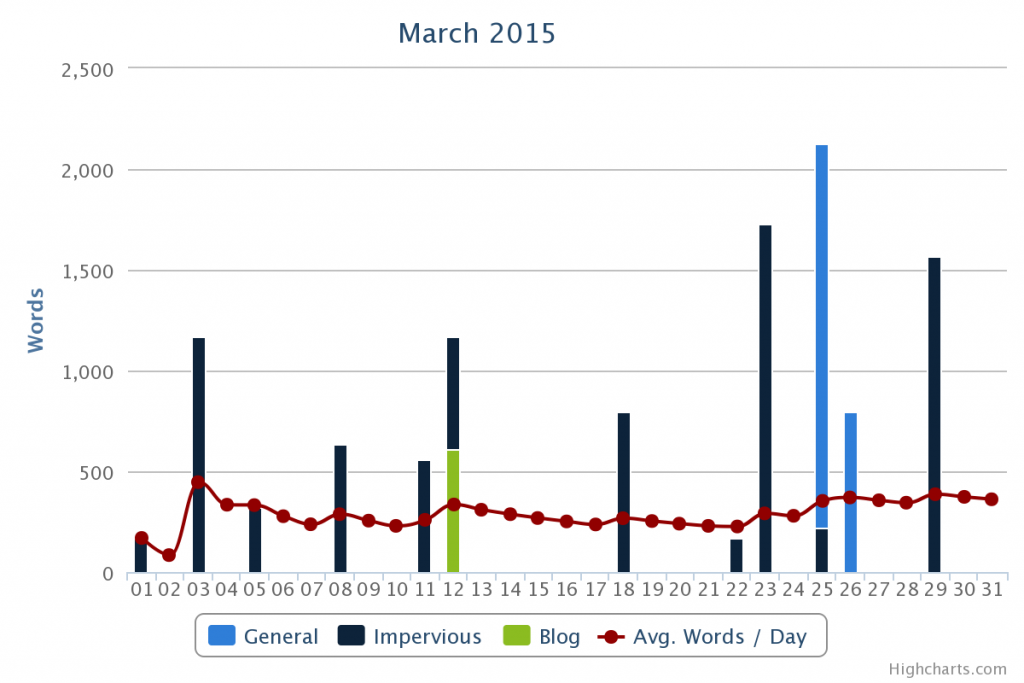 What is really good is that my writing is much more focused. You can see that I’m focusing much more on my work on Impervious, which is what I need to be doing. Unfortunately, as my beta readers know, all that writing you see up there wasn’t on new chapters, like I’d hoped it would be. No, just about everything that you see up there is worldbuilding and character work.

When I had writing group at the start of the month, they pointed out that my current chapter had some serious plotholes in it, holes that would show more and more later in the story.  What it all boils down to is that I didn’t actually think things out beyond a certain point in the story.  Certain characters were also hollow placeholders and needed some serious fleshing out, if only in my own mind.  Thankfully, I’ve got most of those details cleared up, and have several more chapters of details to fill in.   I may have even outlined another book that could conceivably be a prequel.  Go figure.

Which brings us to April.  I still want to do a thirty thousand word month, but I also need to start doing some more serious work on WordKeeperAlpha, which means I’m going to have to temper those goals.  I think, for April, my goal isn’t going to be a specific word count, but rather to write at least twenty days out of the month.  When I sit down and actually get to writing, I can usually bang out at least a thousand words.  So, if I can write twenty days out of the month, I should clock in somewhere around twenty thousand words, which would be pretty respectible.  Not only that, but I’d just about be back on target for the year.

My resolution this year was simply to write more than I did last year.  I’m happy to say that, three months into the year, I am really accomplishing that goal.  In may last year I wrote less than five thousand words, and this month I should clock in at around twelve thousand, which is about what I did in January and February.

Still, I’m finding that getting that first draft done was the easy part.  While Impervious is a much, much better story than it was, its also a lot harder to write.  In the first draft, I could sit down and just write whatever the hell popped into my head.  Now, it has to make sense.  *eye roll* What a pain.

So, this month: write for at least twenty days, minimum fifteen thousand words and make some significant progress on new features for WordKeeperAlpha.  To my friends who are reading this, I’m counting on you to bug me and hold me accountable.  Now, I have some more writing to do tonight, if you will excuse me.