Heya Keepers, it’s been a while since I’ve put out an actual update of what’s going on over at WordKeeperAlpha so I thought I’d let everyone know what I’ve been up to recently. A week or two ago I published the latest update to WKA that enabled the new Projects page that I’ve been working on for some time.

Both Goals and Projects are still in “beta” meaning I’m finding and fixing bugs with them. I haven’t heard any complaints yet, but that just might be because no one is actually using them yet. I’m pretty close to moving Goals off of “beta” but Projects still needs a little cleaning up. 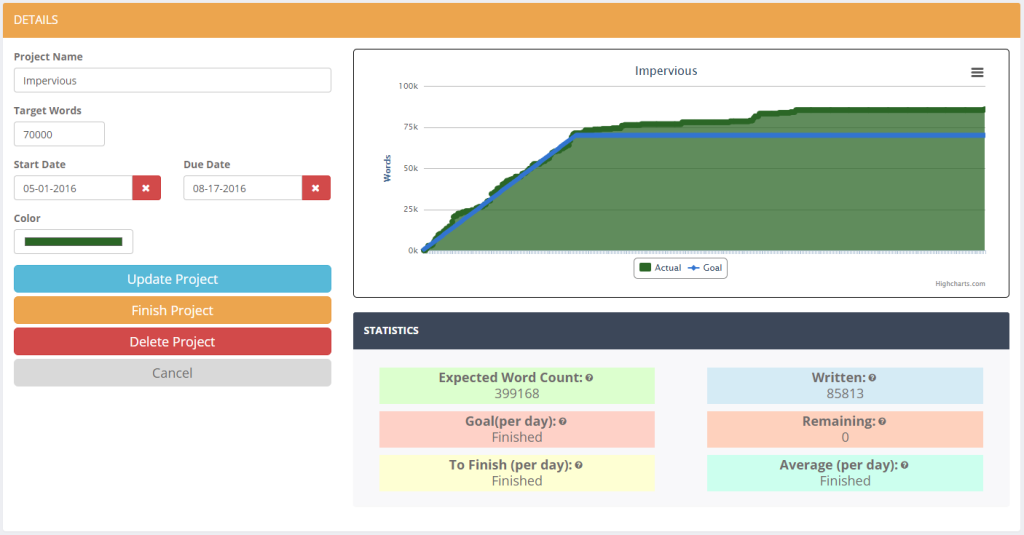 If you’ve got any other ideas for Projects while I’m working on them, please, leave a comment and let me know.

If you’ve got questions about how the new features work, I’ve updated the About page with new information

Once I’ve finished getting the bugs worked out of Projects and Goals, I’m going to move onto other areas that I’ve wanted to do or have been requested. One of the most popular requests has been to update the total word count, as opposed to entering how many words you wrote on a particular day. With the new projects system, I’m actually able to do this now, so I’m planning to work on this next. If you’ve done NaNoWriMo you’ll be familiar with this method of entering words. Another feature I’m attempting to figure out is expanding Logging so that you can log things other than just words written. Would it be handy to set an hourly goal? How about setting a page goal for when you’re editing, or chapter? At some point, (not going to promise when) you’ll be able to record a lot more than just your word count. You’ll also be able to add tags to your writing session, letting you further customize things. For example, you could add an “editing” tag to a word count, or “first draft” to get a feel for how much work goes into a specific project. I’m kind of excited about this feature and want to get it punched out. I haven’t forgotten about Social! Writing groups, writing challenges, contact lists and updates are all coming, but probably not for a while yet.

Previously, I got a lot of emails from users who hadn’t logged in for a while and had forgotten their username. This wasn’t a huge problem for me to look up, but it was a problem for users. I should have had this, so I apologize for leaving it out. So, we have that now! Right next to the “Forgot Password” link.

For new users, I’ve removed the requirement that they confirm their email before being able to login to their account. You’ll still need an email…but its less important than it was. I’ll be adding a confirmation step to the Author area later on if you want to confirm your email with me. I’ve never sent out an email, but I am thinking of starting an “Opt-in” mailing list. I’ve also debugged the emailing system since so many emails were getting lost … we’ll see how this works in the long term.

WordKeeperAlpha is several years old now, and this is its second full version. The original suuuuuuucked. This one sucks less but still isn’t quite as awesome as I’d like it to be. That and its built on .NET tech that’s now several years out of date. The code monkey in me is beginning to really want to start WordKeeperAlpha 3.0, rebuilt again from the ground up to use the latest and greatest tech.

What would that mean for you guys? Realistically, not much. Truth be told, finishing an entirely new version while keeping updates going on the current site is a tall order. But, I want to start working on it. If I did get a new version done, you (the user) would hopefully have a faster, more stable experience. It would also open the way for me to develop an App for both Android and Apple, which would be rad. The new version is when you’d see social, and probably a new “Dashboard” landing page, with some new graph types that I’m thinking up.

WKA is free, and I’m still going to keep it free. What I am going to do sometime in the near future is start a Patreon and a KoFi account for WKA. These would support both my fiction writing and WordKeeperAlpha development efforts. The continued existence of WKA isn’t going to hinge on people donating or supporting me, but it might defray a few of the operating costs and let me purchase some new assets that would make the site better. If enough people supported the Patreon, it might also allow me to get some better hosting for the site, that would lead to less downtime.

If I created a Patreon, would anyone support it? Leave me a comment.

Can’t or not interested in supporting another stupid Patreon? Tell your writing friends about WordKeeperAlpha. The more people who use WordKeeperAlpha, the better I feel about myself as a human being. 🙂 I’m also far more likely to spend more time working on updates and that shiny new version of the site. Tell people about WKA. It’ll net you more neat tools to use.

Are there any web-designers out there? Have you had thoughts on what I can do with the Home page to make it better? I’ve been wanting to improve the home page for a while, but my design work is… “meh” at best. If you’ve got thoughts, share ’em with me and maybe I can make the user experience a bit better. I’d also be willing to pay someone to redesign the home page but my budget for such things is limited. Maybe something some Patreon money could go to. Again, leave me a comment!

Wow… you talked for a long time. Maybe you should stop.

Yeah… maybe I should stop talking now. Thanks, headers that no one realized I was having a conversation with until now. Thanks to everyone for using WordKeeperAlpha! If you’ve got thoughts or comments, feel free to send them to me. I love hearing from all the authors who make WKA part of their writing process. Now, get back to work! What? Are you going to waste all that precious writing time listening to some nerd talk about a computer program? Go! Write! Publish!

WordKeeperAlpha Update: Where its been and where its going.