Its been a while since I posted anything specific on WordKeeperAlpha, so I thought I’d update everyone on exactly how its going and how far away 2.0 is.

During the course of development last week I noticed that I had ten more users than I had previously noted which is both encouraging and disappointing.  Encouraging because that’s easily twice the people than were previously signed up!  That’s awesome.  Discouraging because all of them are getting their first Impressions of WordKeeper from the ugly ass old version.  Lets take a second to compare.  This is the current main page: 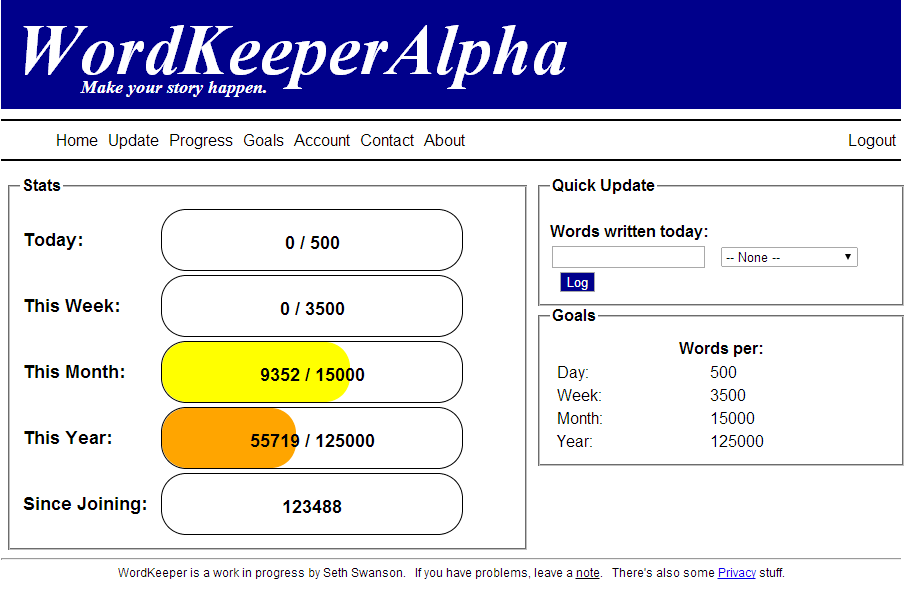 This is what its going to look like as soon as I hit publish in a month or three:

This is what I have for graphing right now: 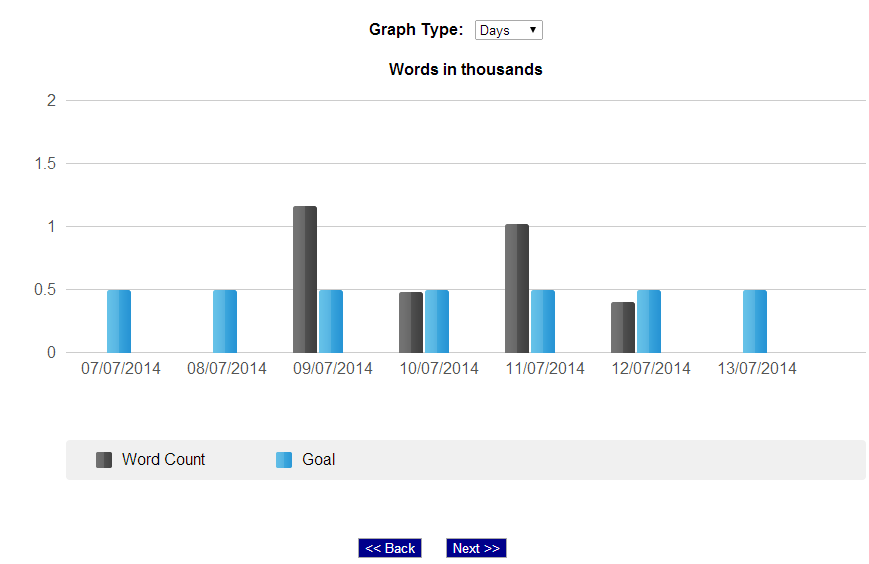 Blech! Right?  It doesn’t even actually work.  I thought it worked for a little while, then around the time I was designing the new version I noticed that it never changed, never kept up… It was broken to the core.  WordKeeper 2.0 is going to start off with 4 graphs!  Not 2.  Not 3.  But 4!   They’re not powered by some crappy code that I just threw together, but powered by Highcharts, an awesome javascript graphing library that I’m acquiring at no small cost to myself.  I mean that… That shit is expensive, but you guys are worth it.  Here are the graphs you’ll see right at the beginning: 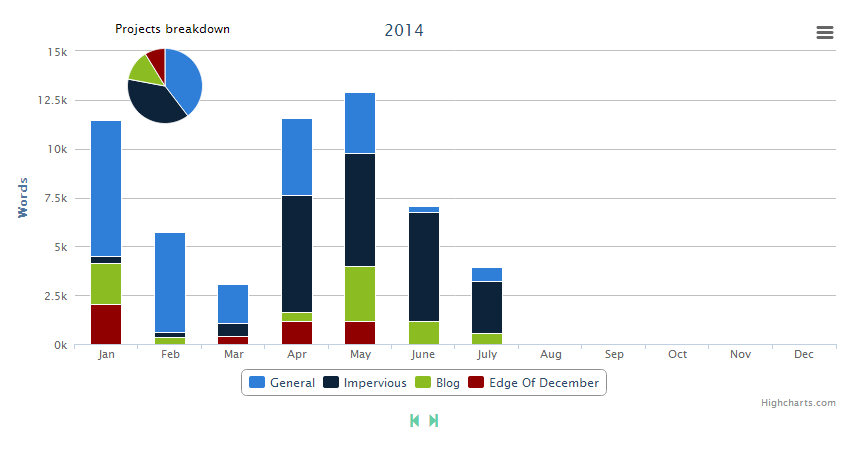 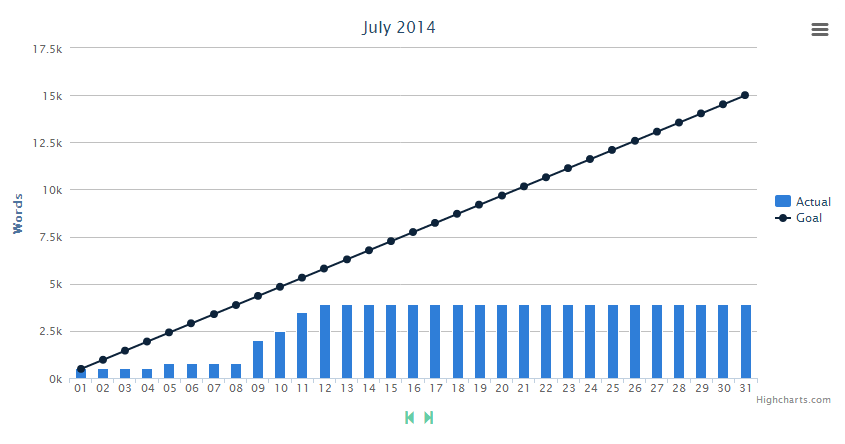 I’ve gone mildly crazy in the data generation for those bad boys, and you’ll be able to do a lot of neat things with them that you can’t see in a jpeg.  Enough of that though.  Next up is goals!  Goals is the section of the site that I’m currently working on and just got the initial code working for.  Here’s how the goals look right now: 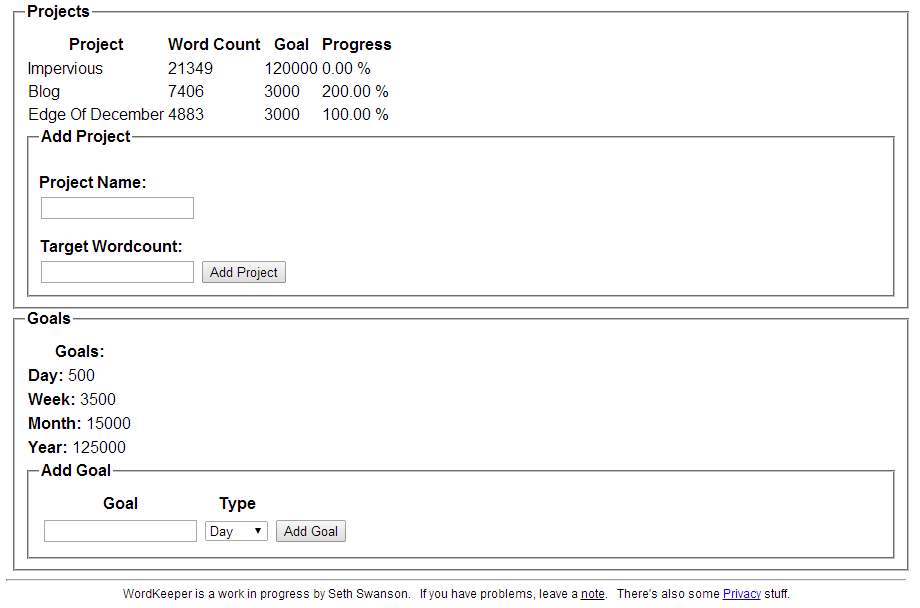 This is the new hotness!

Yes, I used the word ‘hotness’.  Shut up.  I’m excited.   I’m still working on a few of the features for the new goals, but already they are much better than the old ones.  Soon, you’ll be able to update your other goals automatically, or individually (which is a huge pain.)   Once I have the bugs worked out of goals I’ll tackle Projects, which will be a beast all on its own.  You can see what to expect up above.

Unfortunately, I still have a ton of work left to do.  A lot of the code is working only in the sense that I know how to use it without breaking things, so there’s going to be a lot of debugging.

Now, for all of my current users, I have an important question.  I’m sick of the old version being online, generally being ugly and not up to my new standards.  What would you think if I put up version 2.0 in beta form BEFORE I get the Projects code done?  I’d essentially be turning you all into beta testers, but you’d honestly get a LOT more utility out of it, even if I were to put it up now.  I’m certainly willing to work with you and set up projects for you behind the scenes (until the code works).  I’d ask that you report any errors that you find, but it would probably speed up development and final deployment a LOT…and it would get the eyesore that is WKA 1.0 off the internet.  I’d really like to know, so please, post a comment here if you have an opinion.

P.S. Sorry about any breakage that the current WKA is suffering.  Publishing the new version will help with that! 😉