So, I’ve been “gone” for a long time. Rather, my previous blog on my former homepage had been left to wither and die for months while I poured effort into my projects. The first of which being Impervious (first draft finished!), the second being Edge Of December (we have a Kickstarter!) and the last being WordKeeperAlpha (more on that in a moment).

I’ve been a little quiet on what was happening with Impervious because I’d entered it in a contest for NaNoWriMo (National Novel Writing Month) winners. The contest was a great idea by Ravven, and others (who I will hopefully link as an edit to this post). Long story short, I won the first phase, but honorably lost to the aliterative and talented Janna Jennings. Even winning the first phase is huge for me, since I’ll be getting a lot of aid that will help me get Impervious out ready for publication sometime in the next year, including but not limited to cover art by Ravven herself! Seriously, she does some pretty awesome stuff. I reccommend checking out her current body of work here.

So I’m going to be kicking a lot of butt on Impervious in the near future, but really, if that’s all I was doing, shouldn’t I at least be half way done with the second draft by now? Maybe. Maybe if I wasn’t making a new tool for authors who want to set word goals and track their progress online! I call it WordKeeperAlpha and its online and functional. In fact, its a large reason behind why I changed hosts and moved this blog to a new site. Still, its free and pretty neat if I do say so myself. And even if it isn’t too neat, its free. Right now, WKA is still in the beta phase, and I’ll be adding features to it every couple months. Pretty high up on the list is the ability to share your graphs with social media sites like Twitter and Facebook. Impervious is my primary goal though. Here’s a little peak at the graphing feature though… if you want to see more go and create an account. 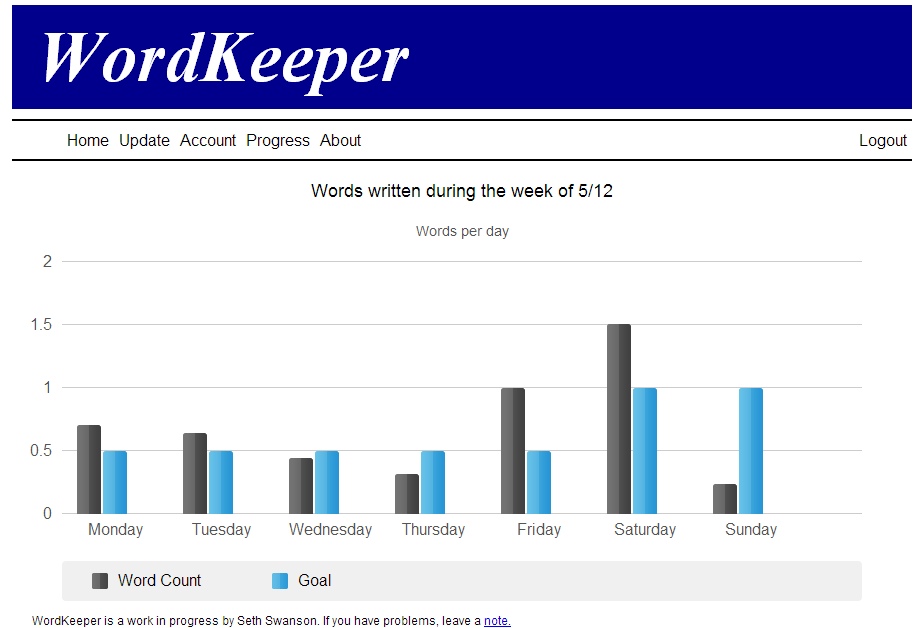 Edge of December has been really busy too. We recently sent Glenn, Court and company to Phoenix Comic-con and by all accounts they had a blast, made friends (also a couple enemies) and made a good showing at our first con. I wasn’t able to join them this year, but when they return next year I’ll be in attendance (hopefully with a book of my own). Also, Edge has a Kickstarter going right now! Go there and you can still get in on our early Kicker opportunities. Save money by backing before everyone else and get not one, but two stories by me!

Now, since I’ve done nothing but talk about news in this post I’m going to leave you with a little bit of happiness for the day. By I Fight Dragons, this is The Geeks Will Inherit The Earth!

I’ve been slacking off…